Home Video Got Some ft The Get Along Gang ‘Bassline’

Got Some ft The Get Along Gang ‘Bassline’

Posted 3021 days ago by Si Mitchell

Check out the latest from The Mono Grande – the official promo for Bristol’s Got Some featuring The Get Along Gang on Defected Records. Story, script and production by The Mono Grande (full cast and crew list below). We shot the lion’s share of this on the Arri Alexa at Camden Studios and on location one long weekend in London January 2014. The green screen shoot was done by Charlie Miller and Jack Mcloughlin in Hackney just before new year 2013.

This was our most bells and whistles Mono Grande project to date – with smart casting by Katie Payne at Redbricks and cool art direction from Lucy Yates and some sweet choreography from Kam Beckles, not to mention A-skills editing and chroma compositing from Jack and Charlie. I’ve pasted the character profiles we used for casting and an early treatment that helped us get the gig below… just for interest like.

1. THE GET ALONG GIRL– she’s a booty shaking, bootylicious 22 year old singer on a bass-thumping, club jumping house tune. She can shimmy like a love-lorn serpent. She can burn like witch doctor’s fire. She’s a snaking dancer, a real head turner. She owns the camera… and anyone who’d dare to look at the pictures its taking. She’s game to be painted gold or silver and undergo several costume changes. Big hair, big personality… a whole lotta love.

2. CHICK is a pint-sized 13 year old lad – not weedy but wild. A feral marsupial in an Attenborough doc – eagle eyed and bat eared, alert, anticipating – ready for anything the world can throw with a un-tameable mischievous fire in his eyes and a quick-to-appear, crafty, loveable smile that flashes across his faces when the cogs start turning (which is often). He’s the quirky looking leader of his gang – THE UNCOOL KIDS.

3. DOC –one of The UNCOOL KIDS – 13yrs old. Doc is the brains of the outfit, a bit of an oddball, skinny, speccy, uber nerdy, but with an imagination as big as the universe he’s been mapping with the computer code he wrote in his bedroom. Whatever plan Chick cooks up Doc will calibrate the logistics and solder the circuitry to put it into play.

4. T – the third amigo of THE UNCOOL KIDS – the goofy, foil to Chick’s big ideas and Doc’s mega brain, T is all heart and undying loyalty – a fellow outcast, who isn’t afraid to use his excess weight in defense of his boys. 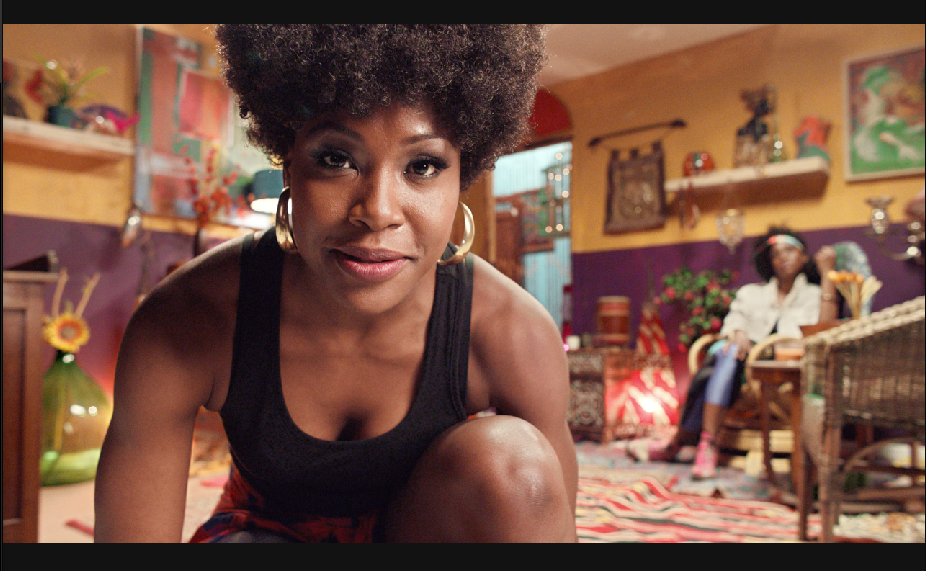 5. THE AFRO’D SISTERS (x2)– okay we call them The Afro’d Sisters, and in a perfect world they’d be just that – possibly twins. BUT they are – TWO 18 year old girls who do everything together – love the same tunes, date and dump the same boys. They love clubbing when they can afford it but do most of their dancing together in front of the TV. With back-combed hair and hotpants, they’re sexy in a ‘not-quite-in-control-of-it kinda way.

6. AMY and AMY’S FAMILY. Amy is in the same class as Chick and the lads. She’s 13 years old, used to like ponies and do piano lessons but is in the process of shrugging all that shit off. She’s like a stick of fizzing dynamite – butter wouldn’t melt now, but in two years time she’s gonna put her mother in a sanatorium.

7. AMY’s FRAGILE MUM – Amy’s Mum (40s) married the man Daddy picked out and is prone to saying things like, ‘I wouldn’t know dear,’ and, ‘It’s not for me to say.’ She votes like her husband tells her to and gave up going out with the ‘girls’ from work cos he disapproved. So when the bassline takes hold of her soul – and it does – it’s a wild transformation to see her leap about the room baring her teeth and  tugging at her clothes.

8. AMY’s STERN DAD – (40s) – reads the Times and doesn’t expect to be bothered when he’s doing so. Had ambitions to follow his father into the airforce but failed the eyetest for pilots – but has made a good, stable career in accounting. Wears a tie, even at weekends, loves a rule and a good system of punishment and reward. Hasn’t got a clue what’s going on behind Amy’s eyes. Likewise when the tune hits him and he upends the coffee tail and falls to his knees bellowing like a randy buffalo it’s something of a life changing moment…for him and the family.

9. AMY’s LITTLE SISTER (10yrs…may look even younger). Amy’s sister still gets a kick out of pleasing her parents. She’s well turned out with lovely long hair and looks like she could likely recite a poem or two. That said, she’s only a couple of years behind Amy in the fucking-it-all-off stakes and is swallowed up with joy when the family loses it in the madness of the music.

10. THE JUNGLIST MASSIVE – Three (3x) 17 year old skinny white boys who’d love nothing more than to be black. Big baggy T’s, big Baggy pants and fat white high tops. The Junglist Massive talk like yardie’s (well to each other) but ain’t never strayed further than the Caledonian Road. They spend their days making mix tapes and practicing in Neil’s bedroom at his mum’s house (cos she don’t mind the noise and makes good cookies). They are a tight machine – will rip the piss out of each other mercilessly but close ranks if anyone else dared try it – don’t mind a bit of posing for the camera or farting on each others’ heads.

11. THE HEADMASTER – An awkwardly proportioned (we’re open to suggestions) middle aged man, who’s easily-ridiculed appearance might have made him swerve teaching as a profession. Obsesses about uniform and gum chewing and all the other pointless things adults persecute kids about. His appearance screams School teacher. Could just as easily be a woman…. He/she will be grasped by a lunatic disjointed dancing fury when the music takes-a-hold.

12. THE BMX KID – BMX riding (doesn’t need to do tricks) youth of 14/15 – bit of a tear away, gelled – possibly bleached – hair. Likes to smoke a bit of weed, but likes to talk about it more. Fancies his chances with the Afro’d Sisters even though they think he’s ‘just a kid’. 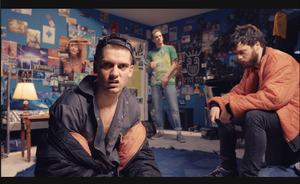 Here’s an early treatment for this video (with most of the elements already in place). We decided early on to colour code the different charcters’ rooms and cut between the same shot in each – retaining the lines in the frame. We watched a lot of Jeunet and Caro films (Amelie, Delicatessen and MicMacs) for this and chose to style the video in that vein  - heavy colour coding keyed to character, quirky casting, faces up close in super wide lenses, warm grade and so on. Some of it stuck and some fell away. Anyway here’s the treatment:

It’s the early nineties and a young boy watches his baggy-trousered, badged-up big brother bundle out of the house and into a car full of caners before he slopes across the landing and into the very out-of bounds confines of big bro’s bedroom.

He digs through the drawers – on the hunt for what every thirteen year old lad hopes to find in an older teenagers private places – pornography. He paws through the skate mags, the piles of C90s, the walkman, the whistle, the old glow sticks until he finally finds what he’s been looking for… some very 80’s/90’s looking girlie mags. But hold on. What’s this? A smile blooms across his face – Jackpot!…. an unlabeled VHS tape.

“This is my baseline…”

We cut to the boy in the front room from a low, TV set Point of View angle. He jams the VHS into the player, switches it on. His face is illuminated by the TV in a kaleidoscope of bright colours. His eyes widen, his jaw drops. “Move move your waistline….”

The shots are often wide and extremely close up (Micmac style). We see our boy dragging a VCR from under a bed, we see him stack it haphazardly on another in front of his TV. We see him with a pile of blank tapes and a growing pile of copies.

Cut to the school yard – the distribution – a conspiratorial huddle – dipping into the school bag – tapes come out – other hands take them. “Move on go from door to door…”

A lad on a BMX pulls up to a group of older teenage girls in a park – a tape gets traded for…? Cash? Something else unseen?

A TV screen looks into a room – a gang of year 10s are nodding mesmerised by the beat. We cut quickly to other TVs Point of View – the girls from the park, other school aged children, older teens and twenty somethings – a couple in a squatted warehouse – three afro-ed sisters, a pair of students in fat white trainers and tight red and green jeans…and they’re all dancing. Tapes go in, hands go up. “Not your average girl next door”

We cut back from the opening scene. Our lad is dancing. His Dad is reading the paper and his Mum is combing his sister’s hair. They look up at the screen – and look appalled “Heard it through the grapevine my baseline…”

From here we cut between the temptress singer snaking around on the VHS and a multitude of TV-POVs – with each scene, the dancing is becoming more intense, girls in hot pants gyrate against each other, young lads with ties around their foreheads leap from sofas. All the while hands exchange video tapes. It’s viral video stone age style – a prophecy maybe. “This will be our marathon – 4,3,2,1…”

In a school corridor a tape is exchanged but the headmaster is on hand and grabs one neck scruff and one contraband cassette.

We see parents burst into rooms and reach for the off button. We see other Mums and Dads getting down to boogie with the kids out the way. The headmaster loads the machine in his office. Elsewhere piled up VCRs bang out copies. The couple in the warehouse are just tangled legs in the air. A car boot pops open – Pulp Fiction style –  to an assembled group of ravers. The reverse shows the boot piled high with tapes.

Feathers fly in a pillow fight, two old ladies, a midget and seven foot man, some beautiful girls, one giant overweight dude – all pulse and gyrate in front of their own TVs – the dancing, though different and personal to each, is choreographed, a splashed drink creates an arc for a spinning arm…a kick leads to a leap, to a spin and cuddle. The squat is now a having it party, fifty people grooving with lights flashing colours. The headmaster and his secretary grooving on the desk. The bassline pumps through every cut, every shot. “Move your waistline to my bassline…” It’s the community equivalent of dancing loved up in a warehouse party with the strobe light swapping one dance partner for another, beaming one face far away another face filling your field of view.

We cut to our original lad’s home. Mum, Dad, young sister are all proper giving it up now, furniture has been overturned – orange stripes have appeared on their faces. The room has developed it’s own pulsating changing light. As the tune ends and our girl on screen gives us one last luring look in walks big brother – the owner of the original tape. He’s been to a party – but not like the one he’s missed. He stares at the family in the wreckage – as they regain their senses and look sheepishly about themselves – like  they’ve just come to their senses.