Posted 3370 days ago by Si Mitchell 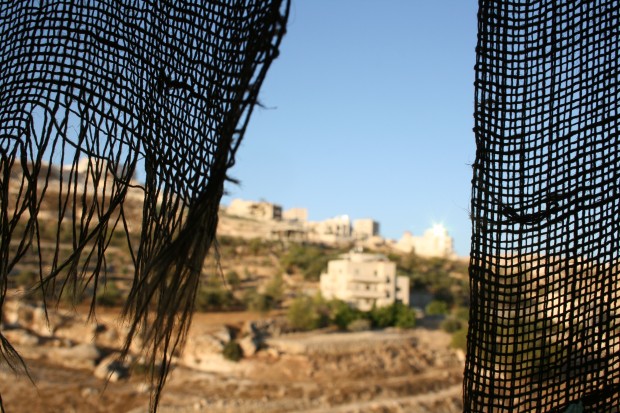 When the big books are involved, sometimes there’s just no reasoning with people. Meet the believers.

“…and sting like a bee.” I laugh. “You don’t look like no boxer to me.” This Mohammed Ali is a smart dressed distinguished looking, fifty-something, Palestinian East Jerusalemite trader.

“Yes. He came here. He is the only one who didn’t laugh when I told him my name. He knew. He knew he born was Cassius Clay, but me? I am the original. I was always Mohammed Ali.”

In all fairness, Ali maybe could have been a boxer. Despite the dusting of white in his close cropped beard, at a fairly well kempt six two he still looks more than capable of taking any one of the petulant youths slouching round East Jerusalem in reluctant looking khaki gangs. The IDF is on high alert in the old city – that means M16s slung to the front, not the back.

“So what’s it all about?” I ask him. We’re discussing yesterday’s bust up between Israeli security forces and Palestinian youths at the Al Aqsa mosque. It seems that a group of orthodox Jewish settlers had tried to enter Islam’s holiest site after Mecca and Medina (despite Israel’s annexation of East Jerusalem in 1967 it is the one place they are still not allowed to go).

“They wanted to go and pray there,” says Khaled who keeps a souvenir shop right outside the Al Aqsa compound.

Mohammed Ali shakes his head. “They are testing us. It was the same thing last year, and the year before. It will be the same thing next year. It’s bullshit.”

“It was a set up,” says Jihad perched on a stool outside the neighbouring stall, working his gameboy like a thumb gym. “There were Special Forces there all ready to go in.” 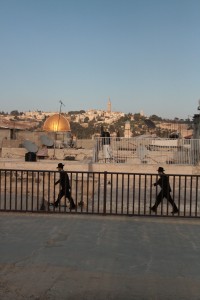 Israeli settlers in East Jerusalem. The Dome on the Rock in the background.

To be honest it sounds like everyone was prepared. Today is Yom Kippur, the Jewish day of atonement (every religion needs a get out clause for sinners) and historically a difficult time at the Al Aqsa. In 2000, Prime Minister Ariel Sharon turned up here flanked by soldiers sparking the second intifada and burying the peace process (of the day) in a single swing. As if on cue, four pumped up, black-clad Special Forces troops swagger past. They look a little more serious than the conscripts.

“Those Israeli tanks?” I ask peering over Jihad’s shoulder as he zaps another with a deft left thumb. “What you playing?”

According to early reports from Reuters and AFP, Jerusalem police said a group of fifteen religious Jews had tried to enter the compound, where they were repelled by waiting Muslim youths who threw stones at them. Later, a police spokesman amended this statement to say the group were French tourists, but Palestinian witnesses say no tourists were involved.

What was undisputed, was that a sizeable group of hard line Jews were congregated in the morning at the al Maghariba gate, the one place non Muslim tourists can enter the site (Jewish visitors wishing to go in need advance police permission). Needless to say, when it kicked off security forces steamed in with rubber bullets and tear gas and one man lost an eye. According to Khaled another man was killed and sixteen Palestinians were injured. According to the Haaretz newspaper no one was killed, 17 cops were injured and 11 Palestinians were arrested.

“They want it,” says Ali. “But Al Aqsa is red line.” And this is where Judaism and Islam look like two dogs, teeth bared and snarling, at either end of the same stick. For, under the glistening, golden Dome of the Rock in the centre of the Al Aqsa compound, known to Muslims as Al Haram Al-Sharif, lies the stone where, it is said, the Prophet Mohammed ascended to heaven. But, this very same stone is also sacred to the Jews (who call the area the Temple Mount) for being the spot where God breathed life into Adam, where Abraham almost sacrificed his son and where Moses kept his ark of the covenant. We can safely say it’s a fairly loaded location.

‘Red line’ is a phrase I hear repeated several times throughout the day. By yesterday afternoon 3,000 people were marching in Gaza demanding Muslims defend Al Aqsa. Saeb Erakat, the Palestinian peace negotiator (currently struggling with Obama’s collapsing initiative in Washington) said, in typical mealy mouthed fashion: ““Providing a police escort for settlers whose presence is deliberately designed to provoke a reaction, are not the actions of someone committed to peace.” In Cairo, the Arab League accused Israel of “premeditated aggression” for allowing “Zionist extremists” into the compound. And so on.

“Will it disrupt the peace talks?” I ask the butterfly.

Ali dismisses the idea with a noise most men save for their tax bills. “They have been talking peace for fifteen years. It’s all bullshit,” he says. “Before peace talks we never had settlers, now we have half a million.”

“Arafat, Abbas (Arafat’s successor as Palestinian PM). They are all the same. Their families have the good jobs, the nice houses. If Palestine gets money, it goes in their pockets.”

Later, in the suk, I run into Mun who supplies local kids with luminous sweets from his nut and day-glo gummy worm stall. He also says Al Aqsa is “red line”.

“It is given to us by Allah. It is written,” he tells me.

Talking with Mun is like talking with my sister Clara – in her case, your conversation is repeatedly stalled by her mobile phone ringing, her answering, ‘yupp, yupp-ing, no, no-ing, huh, huh-huhing’ and then ringing off – and you picking up the conversation where you left off. 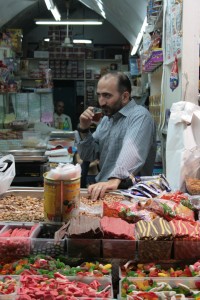 With Mun it’s ‘alaykum salaams’. Mun, you see, is a popular geezer and every tenth person to pass his stall (it’s a busy market) greets him with a ‘salaam ‘alaykum’ (peace be upon you). And each salaam alaykum must be responded to with a ‘wa alaykum a salaam’ (and upon you too). So as we vie from theology to philosophy to conspiracy theory (Mun despairs at my lack of faith in all three), Mun’s conversation is peppered with “wa alaykum a salaams”. We treat it, I guess, like a nervous tic – at first we stopped and smiled and politely acknowledged the interruptions, but now we just pretend it isn’t happening. Mun tells me that the Palestinian people have it tough now, but it’s okay.

“It is like you holding a flame in your hand and you close your hand around it,” he says.

“So you are going through a dark patch?”

”And after the dark patch, there will be easier times?”

He nods. He looks convinced. “In the Koran.”

Despite our discussion about the battle for his homeland, the violence and seeming hopelessness of the situation, Mohammed Ali maintains the serenity of an Oxford don. He is unusually calm. I mention this to him.

“The Israelis can drive us from out of the land,” he tells me. “Into Egypt, Jordan, Syria. But it does not matter. Because in the end we will win. It is written.”

“Yes. Even the Jews coming from all over the world to Israel. It is written. The settlements. Even the wall. It is all foretold in the Koran.”

“So it doesn’t matter how bad it gets?”

“Cos you know how it ends?”

“Maybe not in my life or even my grandson’s. But even if they drive us out of the country, it will cause a mighty war and in the end we will win. ‘Even the trees and stones will speak’.”

“But how can there be a war. Syria, Jordan and Egypt have all shown they are not prepared to defend the Palestinians.”

“Yes. And Saudi Arabia too. The leaders of these lands only have one boss.”

He rubs his fingers together.

“Yes,” he says, then adds. “And the Americans. But in the end it does not matter.”

“Because it is written?”

And here’s the rub. A rub that us outsiders, people not personally invested in the theological struggle for this patch of stony ground haven’t been getting. The absolutes. Those who read, and sincerely believe, old leather-bound books are not wired the same as the people who don’t.

Last week, on the other side of the green line, I sat and chatted to Don, a cheeky Kiwi septuagenarian who calls himself a Christian pastor. We talked about family, kids, the way a Congolese woman can shake her hips to the rolling sea rhythm of a djembe drum (okay my mind might have wandered for a bit). But, he seemed like a reasonable, chatty old boy. But when we began to talk about Israel and Palestine and the brutality of the occupation he just sat and shrugged.

“Surely,” I say. “A religious man, such as yourself, wouldn’t condone massacres and evictions and brutality?” 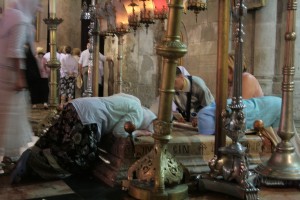 Church of Holy Sepulchre, East Jerusalem, another magnet to the pious, this time Christians

“Er….but, er…” He’s caught me off guard here. “What about common humanity?”

“Well,” he says. “You can look at it from a secular humane perspective and get upset by the bloodshed and brutality,” he tells me. “Or you can see it, like I do, from a scriptural, y’know, a biblical perspective and say – it is written in the bible that the Jews return from the North, the South, the East and West to their homeland in Israel.”

“And if they have to slaughter the indigenous population to do that?”

Today is Yom Kippur, the holiest day in the Jewish calendar. The streets of West Jerusalem are deserted, no one is expected to eat, drive, switch on a light or commit any act connected with creation for 24 hours. Even drinking water is forbidden. Instead religious Jews take the time to cleanse the spirit and atone for their sins of the year. Last year an Arab man who drove his car into an orthodox neighbourhood was stoned to death. It was not the first time.

It is this same sort of absolutism that allows 30 year old settler men, born and raised in Boston or North London, to beat the shit out of seventy year old women harvesting olives from their trees (youtube it) or stone Palestinian primary school children on their way to school and call them ‘Nazis’. (To settlers ‘Nazi’ is a term aimed at anyone who isn’t physically fighting 100 per cent for Zionism – it is not a racist, Aryan ideology coupled with ultra-violent action. There is no irony in the settler lexicon.) Belief is a dangerous thing. But certainty, outside a mathematical equation, seems far, far scarier.

As I leave Jihad to his tank smiting and say cheerio, he stays the thumbs a minute and asks. “What are you? Christian?”

“Ah,” he says through something that might be a smile. “So you are free.” 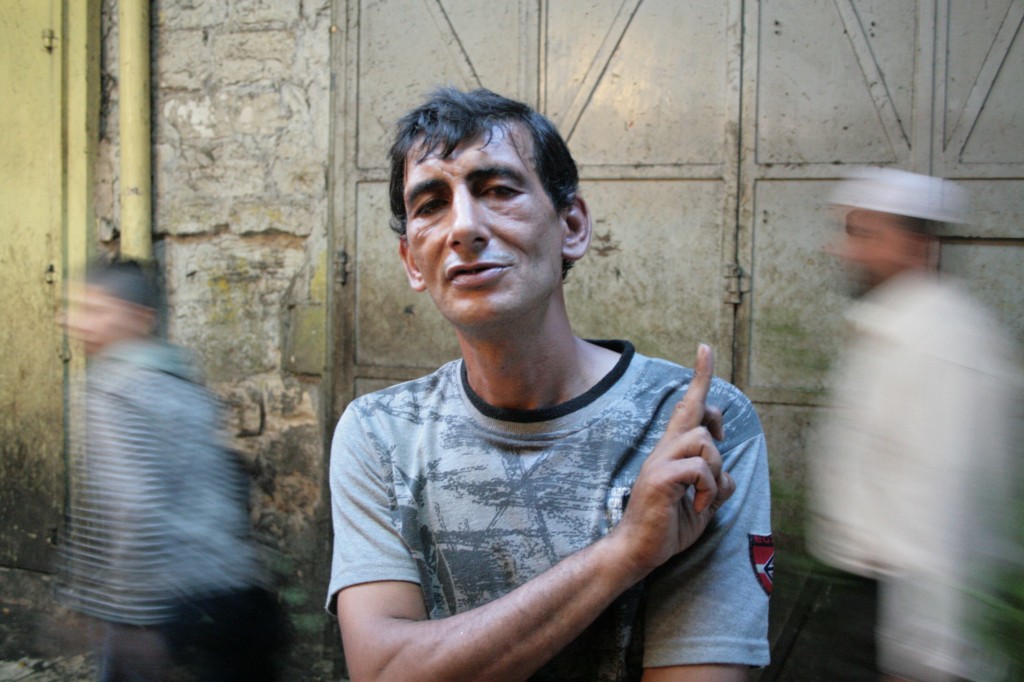