Home Words Imelda May – Queen of the Liberties

Imelda May – Queen of the Liberties

Posted 3211 days ago by Si Mitchell 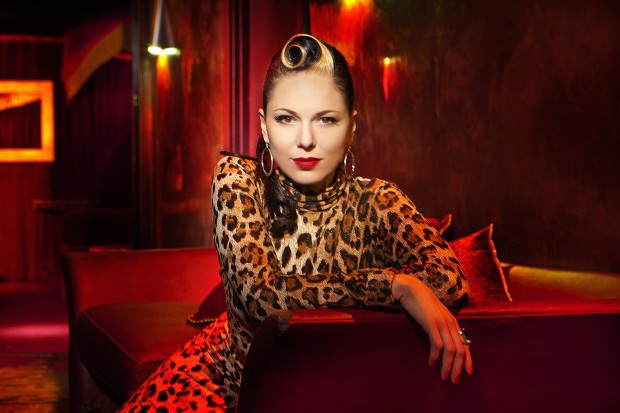 She’s the hip-swinging, bodhran-pounding, shaking, rattling, rolling uncrowned-queen of Dublin’s south side who took the Grammys by storm. She’s everything that’s hip about the past and havin’it about the future artfully poured into a tape-snapping pencil dress with the big, bluesy – railing one minute, lilting the next – heaven-sent vocal chops of the saint she was named after. She is… Ms Imelda May.

In January, you may have seen Imelda and Jeff Beck dropping jaws at the Grammys with their skin-tingly take on the Les Paul, Mary Ford classic How High The Moon. A series of Les Paul tribute nights at NY’s exclusive Iridian club followed where Beck and Imelda wowed the Bowies and the Bruces. But it wasn’t always a petal-strewn path.

“I’m 36 next month,” a relaxed and genial Imelda tells Classic Rock when we catch up with her backstage at the Glastonbury festival. “It’s been 20 years coming, but I’m happy it worked out this way. I learnt my music like a trade. I’m working class, I never went to music school. It’s old fashioned, but I learnt from the best musicians and through my mistakes.

“There were seven of us including our parents in a two bed terrace,” she says. “There was no hiding in your room. If someone was listening to gospel or Joe Cocker it was lashed up. Me Mam was into Dean Martin and me brother into Elvis. It was brilliant for a kid.

“There was one tape, Gene Vincent, Eddie Cochran and Buddy Holly and I was obsessed. I remember learning every word. It snapped something in me.”

Like the music she makes, Imelda is equal parts earned it-cool and blistering enthusiasm. It began when her future brother in law, picking out some keys for a female vocal, asked the young Imelda to belt out a few lines. “’Sing it again,’ he says. Then, ‘Whoa… again’. Next thing we’re down at this blues club where they’re playing and Sean asks me to jump on stage. I was 16. My first gig. After that I was mad for it.”

So Sundays were spent at jam sessions at Bruxelles in Dublin – “bit by bit people let me sing with them” – and in time Imelda joined bands, then later recruited her own.

Unfortunately Cochran was no longer available but, lucky for us, by this stage Imelda had put a ring on the picking finger of the UK’s answer to Eddie C – Darrel Higham. And when her pianist left she persuaded her old man to join the band. She writes all the band’s original material herself on a white six string uke and dots her set with some gloriously executed gems from the Capitol, Ace and Chess back catalogues.

She looks like a bombshell and shakes like an alleycat, and with Darrel’s Rockingham magic, Al Gare wringing six kinds of sinandoa out of his stand up bass and Dave Priseman doing something similar to his trumpet, the band hops from continent to continent, working the hardest touring schedule this side of Helmand.

“We didn’t always have work,” says Imelda, who spent two decades grafting in everything from launderettes to nursing homes (“I loved that one, I’d sing ‘Roll me over in the…’ and they’d all sing along”), to keep the nights free for gigging. And though she says she’d love to fill the switchblade sneakers of, recent touring partner, Wanda Jackson and is a sucker for the old Zodiac and the Ace Café runs, Imelda is adamant she doesn’t live in the past.

“If you put rock’n’roll into the context of what came before, it must’ve been mind blowing. The punk rock of it’s day. I want to capture some of that excitement now, but keep it contemporary. We do a lot of rockabilly but there’s country, blues, a bit of jazz.”

The new album, Pull The Rug, sees Imelda in gutsier, sassier form with a couple of tracks that wouldn’t be out of place in a Stingrays set and the odd sub-gospel heart-popper. Oh, and listen out for the anvil.

“I love our audience,” says Imelda. “There’s all different haircuts. It’s not cliquey. I love it.”

Family and friends are delighted that her work’s finally paying off, “me Mam’s been lighting candles like mad”, and the Liberties fruit n veg man is rumoured to still play her demos to customers.

“People come up who say they’d never heard rockabilly before, but because of us they’ve looked into it and found Johnny Burnette. And we’re like ‘Wooohooo!’” Imelda May – not just great to dance to, but an educater to boot.