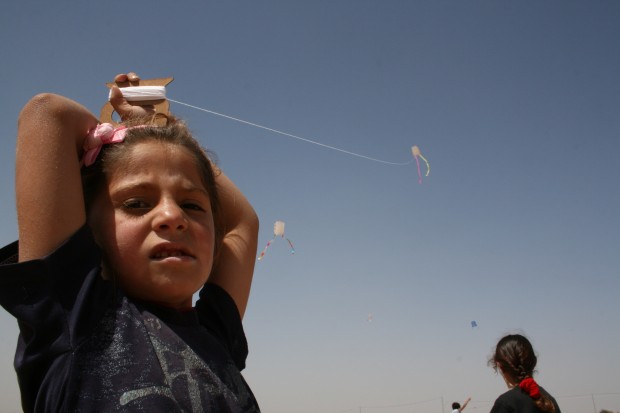 A 13 year old girl is shot dead, but there are no consequences – after all the only victim in Palestine is the Israeli state.

“If it was revenge I wanted,” says Salwa Aramin. “I wouldn’t have come to court.” Salwa is sat in the lobby of Israel’s Supreme Court, her breathy Arabic bouncing defiantly off the starch marble walls of this bastion of Jewish control nestled between the Knesset and the Foreign Ministry. We are waiting for the hearing that could force the attorney general to reopen the investigation of the Israeli border policeman who put a bullet in the back of Salwa’s 13 year old daughter Abir’s head. Salwa makes no attempt to keep her voice down. She is angry. And rightly so.

If there was any genuine justice this case would have been opened and shut long ago. In January 2007, Abir and her little sister were buying gum from a kiosk on the way to school in the Palestinian neighbourhood of Anata, East Jerusalem. An Israeli border policeman stuck his M16 rifle through a slot in the side of his armoured jeep and shot the young girl in the back of the head. Abir died and the family imploded. Cursary investigations by the army and district attorney suggested ‘she was playing with a bomb,’ and later that, ‘she was hit by a stone thrown by a Palestinian youth’. This, despite the rubber coated steel bullet that killed Abir being found under her body and given to the authorities.

“This is no exception,” says Salwa. “This is not the first time the Jewish army has killed children.”

Bassam’s lucky to be at the court house at all. Salwa has blue ID that allows her to travel to this part of town. Bassam and the children carry green ID. They cannot pass into West Jerusalem, the Israeli held part, without specific permission. He finally got his this morning.

“We win in the end,” says Bassam. “Because we fight for justice.” But his eyes tell me he doesn’t expect to find it here today.

And he doesn’t. The prosecutor won’t even lower herself to look at Bassam or his crying wife.

“So they found a projectile. So what?” she says. “So people gave testimony, so what? They (the Arabs) can say anything, does that make it testimony?”

“If you were in my place,” she says to Michael Sfard, Salwa and Bassam’s lawyer, “you would have made morsels of them by now.”

“If this had been a Jewish girl, someone would be in jail,” observes Chen Alon, a co-founder of the Israeli justice group Combatants for Peace, who is stood outside the court room. “The Supreme Court make the occupation ‘kosher’ – house demolitions, arrests, assassinations, the lot.” As it happens, it is only because groups like Combatants for Peace took up Abir’s case that her’s didn’t end up in the ‘don’t hold your breath’ pile along with the hundreds of other child murders carried out by the Israeli military each year. “That’s how blind Israelis have become as a society,” says Chen.

Inside the court, the judge reminds Sfard that soldiers are rarely put on trial and never convicted, so they might as well just let it slide.

The next day I meet up with Nurit Peled-Elhanan in the grounds of the Hebrew University where she teaches. Nurit barely conceals her rage at the contempt shown by the court towards Bassam and Salwa.

“Three women judges and not a word of condolence to the parents,” she says. “‘Don’t bother,’ says the judge. ‘Remember Gaza’, ‘Nothing will happen.’ ‘A Palestinian child dies, who cares?’ Compare that to the festival surrounding Gilad Shalit.”

“It’s the ultimate demonstration of Israeli racism,” says Nurit. “The parents of a murdered child are forced to seek justice from her murderers. From the Master. It’s surreal. It’s horrible.”

Nurit – the daughter of a highly regarded IDF general – was one of the few people in the court yesterday who may actually understand how Salwa and Bassam feel. In 1997 her own 14 year old daughter, Smadar, was killed in a Palestinian suicide bomb attack in downtown Jerusalem. But Nurit’s anger is not aimed at the Palestinian people.

“The difference between me and Salwa and Bassam is that, at least my daughter’s killer had the decency to kill himself too. Abir’s killer just went to the pub.”

Nurit is quite sure that the occupation is to blame for the bloodshed and bereavement on both sides. She is part of the Forum of Bereaved Parents, a group that deliberately disregards the differences of birth and skin tone that appears so important to the Israeli state.

“Salwa and Bassam will never get justice,” she says with an angry sigh. “The aim is to de-Arabise the country, 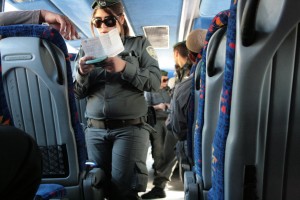 it is only the methods that vary. Yes there are the bullets and courts, but Israeli children are taught to hate and fear the Palestinians from the start – the textbooks don’t even call them that, just ‘Arabs’, or ‘foreigners’ – this is all they know, after all they have no contact with real Palestinians. The constellation of Israel is based on acute and barbaric racism.

“This country is run on mafia ideals. Slash and burn, no regard for heritage or environment. It’s an apartheid state – a ruling minority and a slave majority. The intelligentsia, the graduates, are leaving and are being replaced by religious Jews. And if anyone dares to criticise? It’s: ‘We are not Hitler! Who are you to tell us what to do?’ Once a victim…”

A few days later I take myself to Yad Vashem, the Israeli Holocaust museum carved into the foot of Mount Herzl in West Jeruslaem. The course grey concrete of the building is testament to the hateful slaughter and brutality of the Nazi’s extermination of 6 million European Jews. Our tour guide, Debbie Spiro, leads us through the maze of rooms with her sing-songy New York accent. The thousands of photographs and documents, the hours of testimonies and miles of film footage leave you in no doubt to the scale and barbarity of one of humanity’s greatest crimes.

But something nags. Despite Niermoller’s, ‘First they came for the communists, but I was not a communist so I did not speak out…’ being rendered in foot high letters on the wall, this shrine is strictly concerned with Jewish victimhood. The six million Roma, dissidents, black, homosexual or disabled people that also went to the gas chambers feature merely in passing. “In a single day,” Debbie tells us. “200,000 Jews were expelled to the Lodz ghetto. But not a single person from outside stands up for the Jewish people.”

We all nod apologetically. We don’t ask why 200,000 people never stood up for themselves. The blanket of victimhood it would seem does not stretch to cover those with the audacity to fight back. The Warsaw ghetto uprising is represented here, but Debbie swans right past the display, just as she does not draw our attention to the video testimonies of those who broke out of the camp-bound cattle trucks, much to the distain of the death-accepting rabbis praying inside. 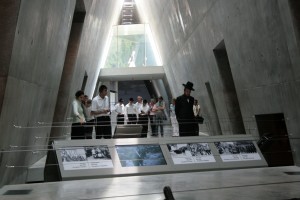 Studying the past at Yad Vashem

When Debbie talks about the “German Jews stripped of their nationhood who became persona non grata in their own country”, I look at the other members of the group – a couple from Golders Green, a Jewish American with a pistol in his belt, his family, some Italians – am I the only one making a connection?

Debbie is keen for us to make other connections. She tells us Yad Vashem has never been more necessary “what with what’s going on in Iran just now”. She slips almost unnoticed between ‘Nazi’ and ‘terrorist’. (It’s a settler trick – Nazi, terrorist and Arab are interchangeable nouns for anyone who defies them).

Debbie points out a group of young conscripts being shown around the memorial. “You’ll notice lots of people in military uniforms at Yad Vashem,” she says. “Because, we bring every one of our young IDF soldiers here so they will understand what it is they are fighting for.”

What it is they are fighting for? There’s a giant brown elephant stomping about the room, but no one dares even think it. The parallel’s are plastered across every wall in here – the ghettoisation, the checkpoints, the photograph of the town square in Lodz divided by a ten foot wall, the arbitrary killings, the house destructions, the attempts to erase an entire people from history – and they are more than ignored. Instead, teenage Israeli conscripts are brought here and told they are occupying Palestine because of the Holocaust.

As we reach the end of our tour, the memorial opens onto a platform looking out over Occupied East Jerusalem and the West Bank beyond. In case we still haven’t got the message, Debbie dabs a tear from her eye. “In 2009,” she sobs, all her melodrama channeled to this one moment, “the Jewish people are still not free to live at peace, in their own land.”

As I leave Nurit Peled-Elhanan she tells me how her son had come to Abir’s court case and watched proceedings in shock. “I told him,” says Nurit. “ ‘You see how easy it is to become a Nazi.’” Unlike most Israeli teenagers Nurit’s lad, encouraged by his parents, does have Palestinian friends. “Tonight he goes with his classmates to Auschwitz,” – as well as taking it’s young soldiers to Yad Vashem, Israel flies every school leaver to Auschwitz to see the camp first hand – “and then…”

”And then they expect him to go to the army.”

“He’s very perplexed,” she says, looking a little perplexed herself. “We hope he will refuse.” 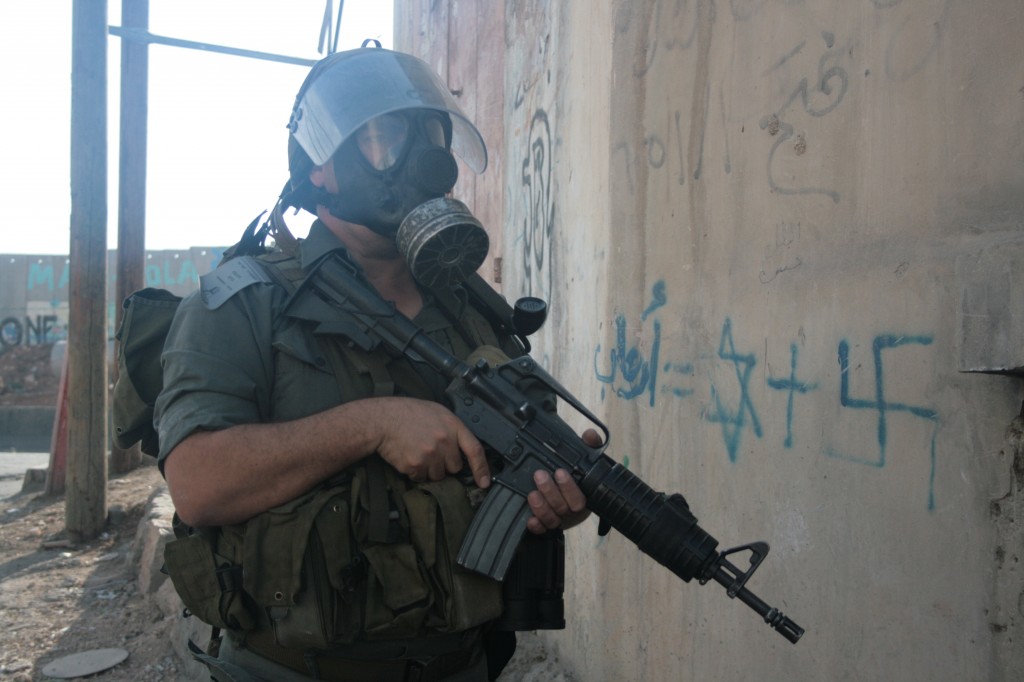