Home Words Last One In… 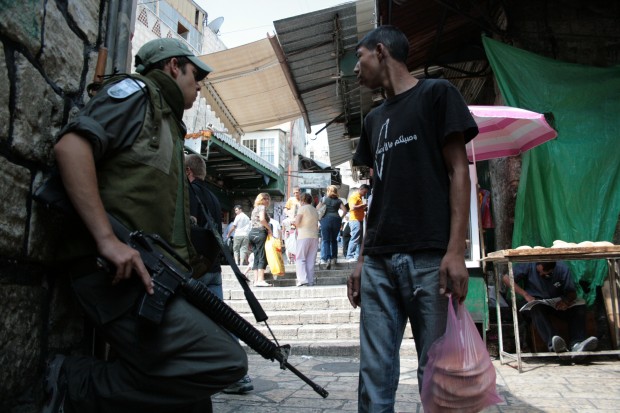 Many Israeli Jews are Arabs or Africans and their experience is very different from those of European descent.

So, the sun dips into the Mediterranean somewhere beyond Jaffa’s Andromeda rock and I’m 80 klix inland trying to get my noodle round a oddball gang of African, Persian and Iberian Jews belting through snakeskin, deep-east versions of old Jewish folk tunes beneath the floodlit minaret of a one-time mosque (now claimed by the Israeli state as a Jewish temple) built by legendary friend to no-one King Herod. So what gives?

Shlomo Bar, Moroccan/Israeli folk hero come sometime thorn in the foot of the establishment, is hammering three kinds of hell out of the darbuka drum wedged between his legs, belting out Yeladim Ze Simcha (Kids are Joy) an ironic spin on the Zionist state mantra peddled in the 1950s in order to encourage procreation and boost the Jewish demographic in the country.

‘Eight, ten, twelve is better…kids are joy…” I didn’t get the exact lyrics, but Mouse shouted rough translations into my ear. The point is Shlomo Bar, and his band members – Iraqis, Iranians, Moroccons, Yemenites, Spainiards and a bunch of other places that ain’t Poland – are Mizrahi Jews (though technically the Moroccan and Iberian Jews can be classed, by people who got nothing better to do than hawkeye this shit, as Sephardi), but, the unifying factor is, they are all Jews of Arab decent.

Arab Jews, like all Jews, were encouraged to come to the new land of Israel, but when they got here they found they were expected to be the dogsbodies for the emergent nation and to do the jobs the European immigrants didn’t want… The houses and best land, stolen from the Palestinians (remember the Palestinians are not even considered human in Israel – and Israelis like to call the Palestinians who stayed in Israel after the Nakba Arab Israelis – and get none of the rights afforded Jewish Israelis), had already been distributed among the Ashkenazi (the European Jews) and those that carried 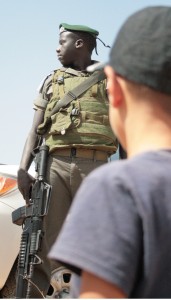 Much of the sharp end of the occupation is carried out by Jews of African or Arab descent.

out the Nakba. Ditto the good jobs. The Mizrahi were dumped into camps, and having given up their roots and homes in Persia or Egypt or wherever, felt downright shafted. No money, no house, no land. Like the Caribbeans of the 1950s Windrush years convinced to up sticks and come to the UK to drive the buses the British couldn’t be arsed to drive, they were second class citizens in the land of their dreams. Could it be worse?

Well, yes it could. The black mark of racism is like a buck to be passed. Last in, first out. So all the Arab Jews had to do was wait for the next wave of immigrants, and when they came, everyone shifted one rung up the ladder.

“Were they encouraged to come?” I ask.

“Encouraged?” laughs Mouse. “Many were brought by force.”

But the arrival of the Ethiopians meant the Jews of Arab descent were no longer at the bottom of the pile, they had someone else to look down on. Just as Asian or Caribbean Britons can snarl at Eastern European new arrivals, so it happened here. Lucky for the Ethiopians, there’s been a later influx of Jews from Georgia and the Caucuses, so all shift and breathe a sigh of relief cos there’s some other prick to lord it over.

Despite having spent centuries living harmoniously with people of other faiths, the Arab Jews arriving in Israel were encouraged to no longer tolerate others. Many changed their names. The ironies are painful. 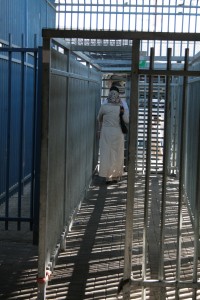 Queuing to cross at Qalandia.

On the walk back to his house I ask Mouse about this. “This is the most racist country,” he says. “My grandfather was from Alexandria in Egypt, he spoke only Arabic. My father lived in Cairo and didn’t speak a word of Hebrew till he was ten years old. Yet now they talk about Arabs as if they are vermin. My grandmother, on my mothers side, is a holocaust survivor. She escaped the camps and fled to Montgomery Alabama. She tells me stories of how they had barbecues with ‘niggers hanging form the trees’. I shit you not. This woman has been involved in three of the most appalling racist events in human history. She’s a holocaust survivor and she’s the most the Nazi person I ever met.”

Mouse believes religion is merely a tool used by Israeli nationalists to get people behind the message and behind the crosshairs. And the holocaust is a backdrop to everything that happens. Israel was created from pain and brutality and is steels itself with the spirit of the persecuted survivor. The holocaust justifies all Israeli state violence, war crimes and racism, period.

A teenage soldier puffs on a cigarette and eyes us as we pass Prime Minister Benjamin Netanyahu’s razor wired and gun turret-blooming Jerusalem residence.

“Take this guy, Netanyahu. He was our most right wing Prime Minister right. He was our Thatcher. And we elected him twice.”

We all like to bitch about our politicians, but Mouse has a point, this is an unashamedly vicious far right government, even by Israeli standards. Imagine the BNP sweeping to power and then ruling hand in horsehair glove with extreme Presbyterian protestants, and you’re halfway there.

“Er. This ain’t a chocolate thing is it?”

“You see, the Congo was a Belgian colony,”

“Yeah, and a bloody colonisation it was too. The Belgians slaughtered thousands of Congolese and fleeced the Congo for 100 years.

“And no fucker remembers. Belgium, it’s a bastion of good behaviour, a 21st century economically stable first world democracy. The Israeli state is prepared to be the devil for now, get the job done, take the land, run the Palestinians outta the country or into their graves.”

“And fifty years from now they can elect a liberal government and erect a statue apologising for past behaviour.”

“Exactly. But by then Palestine is just a memory and Jerusalem is the economic hub of the Middle East.”

“Yeahman. And they’ve had this shit mapped out from before they kicked the first door in.”

Between songs Shlomo Bar explains that many of the old classic Jewish folk tunes (Shalom, Shalom anyone) originally sang in Hebrew only survive because they were translated into Arabic and played down the centuries by Jewish Arab musicians. It’s only relatively recently that they’ve been translated back into Hebrew. (Hebrew was itself resurrected from Biblical texts into a functioning language in the 1850s). So he plays them with all the Arabic melodies and influence they picked up along the way. He ends the set with a call and response tune where he sings ‘Aaaallahhhh…’, and the crowd chant back ‘…Aaaal lillahhh’. A crowd of Jewish Israelis calling to a Muslim God in Arabic in the Temple of David, a former mosque, come Herod’s palace in Jerusalem’s old city, east of the green line, but west of the barbaric apartheid wall. This guy really is having a laugh isn’t he? But will it make the slightest difference?