Posted 2500 days ago by Si Mitchell

- a piece from the Balkan refugee route September 2015.

“There was no food. Nothing. People ate tree leaves. They ate cats. You know what a cat is?”

We’re on a train rattling through northern Hungary and Tarek is describing the siege of Yarmouk, the barrel bombed Palestinian refugee camp in Damascus he has recently fled with his wife and young family.

Tarek is wiry and animated and as he speaks his super cute wide-eyed kids – a boy and a girl – push their noses flat against the compartment window and grin. I imagine them eating cats.

Further down the train I meet a group of teenage lads. They could pass for British gap year students if it wasn’t for their politeness, or the stab wounds they show us when they lift up their shirts. They are from Aleppo. “In Turkey it was very hard,” says Ghaith. “You had thieves and bandits. They came at us at night with guns.” 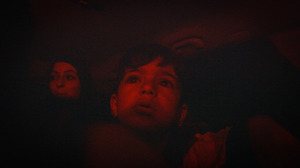 Heading south into Serbia as the refugees head north we hear the same ageless tales. “We were wrecked at sea,” says Mohammed, who looks like the last person you’d expect to make such a statement as he bumps his airport trolley case over the muddy sleepers of a disused rail line. “People drowned.” “We slept in the forest, with nothing,” says Basel from Raqqah. “Not even a blanket,” Several people tell me, “We sold our gold to make this journey.” In Belgrade I meet a group of Afghan boys sheltering in a car park, regrouping for the next leg of their journey. They tell me they are sixteen. Some look younger: “We were in the desert,” they say. “Without food, without water.”

There is a folkloric quality to the stories – an exodus according to The Brothers Grimm – or any of the old religious texts now buried under Syria’s rubble. 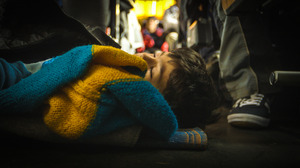 And for every super cute round faced kid asleep in every bus station or slumped on the shoulders of their rest-robbed fathers, this journey will frame everything that follows. Like the displaced Europeans who carved out their dynastic chronicles from the chaos of World War II – these family histories start here.

Stumbling through the inky darkness along the old Serbian rail line I run into Adnan, a gynaecologist from Damascus. Adnan has spent the last few years setting up and running field hospitals for injured civilians in Syria’s bloody war. It was Adnan that collected tissue samples to alert the world to Bashar al-Assad’s ‘red line’ use of chemical weapons. He is high on the regime’s hit list. Adnan is surprisingly perky.

He describes the bid he’s making for a new life in Europe, with his wife and children, as “an adventure”. He pulls out his smartphone and shows us a video of the family’s arrival in Greece. The overloaded death trap dinghy reaches the shore and Adnan and his wife and kids leap into the water and splash about like holidaymakers. His family’s new history has it’s own movie.

It’s the middle of the night and Adnan’s two young boys Wisam and Omar are tired and grizzling and wondering if we’re nearly there yet. Adnan chivvies them along as if we’re out dog walking on a sunny Sunday. “Come on habibi (my love),” he says planting a wet kiss on the smallest boy’s cheek.

A few hundred meters from the Hungarian border Adnan spots an old guard tower and scampers up for a bird’s eye view of the frontier. Out comes the smartphone. “GPS,” he grins, pulling up a Google map.

From here we can see the last gap in the border fence marked by the Hungarian police’s powerful spotlight. It’s an intimidating sight on this misty moonless night and people stop short to smoke cigarettes and weigh up its implications. Adjacent to the rail lines some people smugglers have lit a fire. 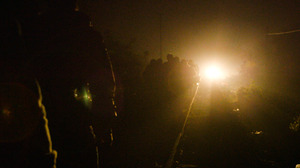 In Budapest there is a drought of cheap cigarettes and, I am told, you haven’t been able to buy any weed for a month. No one is running dope or untaxed tobacco across the borders now. The big money is strapped to the bellies of Syria’s moving middle class – and the word is out they’ll pay handsomely to pass through Hungary without EU stamps of entry.

The smugglers line up around 200 refugees and instruct them to pull out their phone batteries. “No fingerprints,” they promise. “No police.” Then they relieve them of fifty Euros each and march them past the handful of disinterested cops smoking cigarettes on the border. It seems the motivation to profit from others’ misfortune is human nature too.

Everyone making this journey can tell you a woeful tale. Regularly, people pull out phones to show us pictures of garlanded corpses – “my brother”, “my wife”– or piles of rubble that were once “my home”. The news bulletins carry parades of long lonely faces, but I see plenty of selfies getting taken, occasional laughter and newly weds, pregnant women and lots of cute tiny babies – born in bombardment, or on the road. 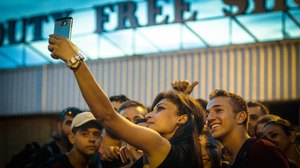 As the Hungarians finally close the borders I find Aisha from Somalia sat on the curb on the Serbian side of the Roske-Horgos highway crossing. A crowd of several hundred refugees are shoving and shouting hoping to cross before the gates close for good. People are skittish, intimidated by the lights and rows of surly riot police. Rumours run round, the gates will close at midnight… at two o’clock… any minute. Aisha doesn’t engage with the melee, instead she coos at the small swaddled baby she holds in her arms and reaches behind to reassuringly touch the cheek of the bright eyed toddler peering cautiously over her shoulder.

I ask her what she will do if the gates close. She shrugs and shakes her head without sadness or apparent pressing concern. Despite the precariousness of her situation – sat on the roadside at a hostile border of a continent that may or may not grant her entry with two small people reliant on her every decision – she is completely calm. Mass flight from conflict may well be inherently human, but so is the belief that things will be all right. Perhaps without it you’d never set off in the first place. Are you afraid? I ask her. Aisha smiles, at the foolishness of the idea. “No,” she says. “I have hope.”