Posted 2826 days ago by Si Mitchell 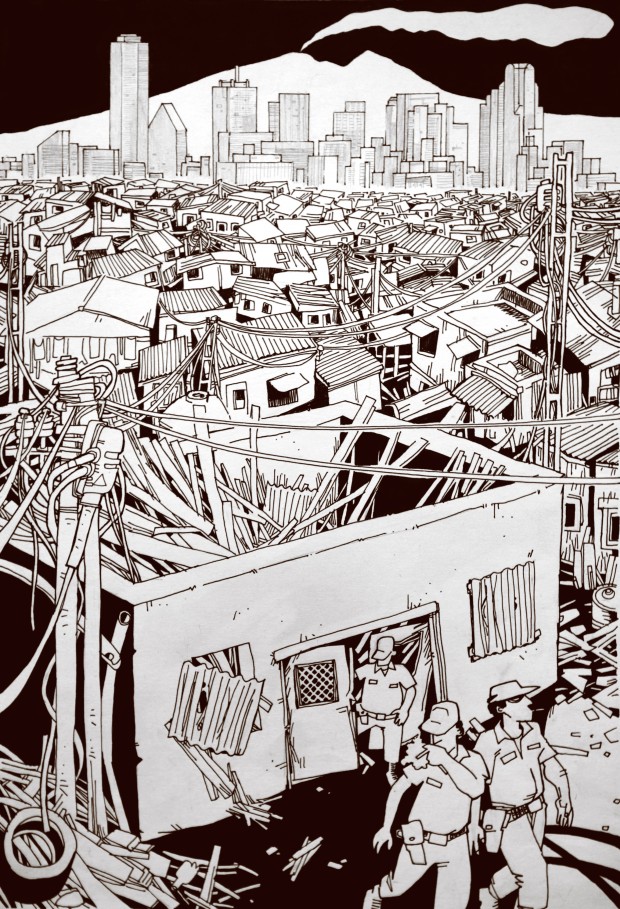 Pablo doesn’t remember falling asleep, but the first thing he hears when he wakes is Marta’s breathing. Slow and steady. Alive. Awake. If she’s moved, Pablo can’t tell. She stares straight ahead, and does not turn her face to acknowledge him as he crawls over to her. The door she lies across lifts and falls, almost imperceptibly, as she breathes.

She is the one with the blood dried on her mouth and the bruises beginning to cloud her face, but somehow the dynamic between them is the same. Pablo needs reassurance. Marta must give it.

But her face is blank, motionless, save a slim trickle connecting one eye to the tabletop. It’s Marta’s job to have the answers. Pablo has never had to consider a limit to her strength before. Bubbles form and pop on his flickering lips.

He reaches out a hand to wipe away her scary tears but misses and jabs Marta hard on the side of her nose. She doesn’t recoil, but the knock makes her look at him.

She studies Pablo for several seconds, before realising that he’s waiting for, needing instructions. 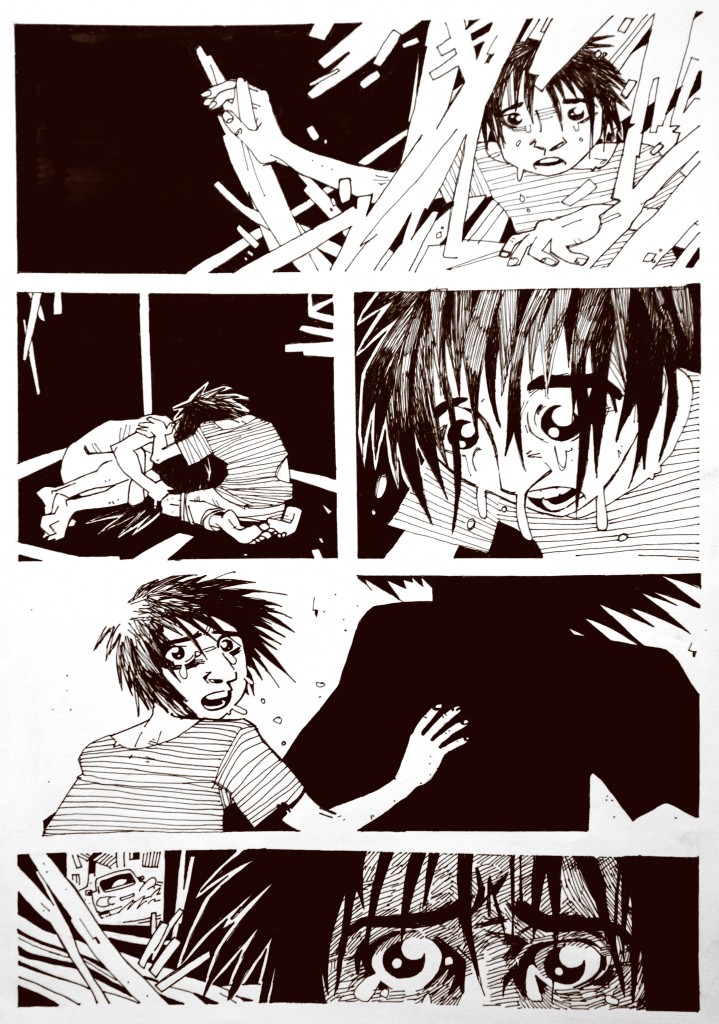 Without moving she says: “Let’s go out of here.”

Pablo sags, relieved to give up his decision making duties. Not that he had made many, any, in the short time he had had them.

He looks away while Marta dresses herself – just as he had looked away last night – and they climb across the debris of brick and tile and out through the splintered door the cops kicked in and into the street.

Cartons and cans and bags and straws and paper cups blanket the city. Legs and breasts and faces slashed by smiles and kitchen knives grin up at the children from flapping newspapers. And though it didn’t rain in the night, the mesh of ruts and potholes that form the barrio’s streets are, as ever beneath this detritus, ankle deep in filthy brown soup.

Marta walks, oblivious to the sunlight or the sounds, or whether or not her feet fall in or out of water, while Pablo skips in attempted step behind her.

The EJE1 is a screeching, smoking brawl of cars, trucks and buses from all points north that butchers its way into the city each morning and out again at nightfall. Guate – as the residents know their city – is a passable venue to turn a coin, but it’s no place to spend the night if you can afford not to.

Marta doesn’t even check her step as she glides into the pandemonium. Pablo pursues her into the traffic but the wail of shoeless-brakes biting rust-pitted drums makes him spin round just in time to see what used to be the radiator of a 29 bus baring down on him. He drops to the ground as a hundred plus, sardine-packed, commuters concertina inside and the driver leans hard on his horn. Luckily, God’s blessing – ‘Dios Bendiga Esta Bus’ – plastered in sparkling red, gold and green across the bus’s windscreen, is in full effect. Though it’s a wonder the teenage driver can even see enough through the letterbox of glass that’s free from stickers to spot Pablo at all. But he does and, thankfully, the brakes hold.

Pablo opens his eyes, quickly makes his peace with the two tons of steel bumper hovering inches from his head adn dashes after Marta who he can see disappearing between a taxi and big black four by four.

Pablo catches up with her as she clears the final two lanes of traffic and cuts into Zona Tres heading up undertakers’ alley towards the Basura.

The coffin makers are up early too, stripping down boards of pitch pine. They seem to be the only people in the city – aside from the prostitutes sucking on Coke bottles outside the hole in the wall tiendas – guaranteed work every day.

Pablo doesn’t want to get to the dump without breaking the silence between them. He doesn’t have the vocabulary to say what he’s feeling, let alone make Marta feel better. But he needs to close the gap.

“They’re pigs, Pablo. They’re not men.” Marta’s voice is calm. Scary. Missing the cool assurance Pablo would like to hear. He wishes he had done more to protect her last night.

“Sorry they didn’t fuck you too?” She spits, swivelling to face him. “Sorry you’re not lying in a mess of blood and bone in that stinking building? There isn’t much more this city can do to me Pablo. I don’t need to watch it eat you too.”

Her outrage frightens him as much as her earlier calm, but it’s also a reassurance of kinds. If Marta’s still concerned about him, maybe things can be okay.

Pablo had feared she would shake him off after the fight with the taxi driver. But she hadn’t. Strictly speaking it hadn’t been Pablo’s fault, but if Marta hadn’t come along when she did, the man would have had Pablo in the back of his car and been off. Even at seven, Pablo knows rides that begin like that are one-way trips.

It was back in the rains. The market traders had been hurriedly packing up and Pablo and Marta and some of the other kids had been trailing through the gutter streams on the look out for runaway tamales or other sea-bound scraps. A taxi driver, out of his car, had caught Pablo’s attention with a click of his tongue and beckoned him over with a ten quetzal note flickered between two fingers. When Pablo had gone over to the man, he had grabbed him by the arm and tried to force him into the car. Marta had seen and she ran over, jumped on the taxista’s back and bit him in the face. Pablo remembers the long line of adults hunched against the rain waiting for their buses. They just stood there, clutching bags of potatoes, doing nothing while a couple of grubby street kids fought a full grown man. It hadn’t even been dark and the marketplace was still busy. The taxi driver had pulled Marta off his back and punched her full in the face. Not with the sort of slap a drunken parent gives an unhappy child, but a full-fist, angry punch that carried the entire weight of his upper body. Marta had flown, like a shot bird, through the air and hit the road lifeless, out cold, blood spread across her face. The driver had dusted himself down like a cowboy – as if he’d been in a real fight with another man – and shot the bus-waiters an exaggerated ‘can-you-believe-these-kids?’ look before getting in his car and driving away.

Marta had been unable to speak, or eat, for days. She’d suck on the soft peaches they’d find when the market closed and spill water down her face from a bottle Pablo would carry for the purpose.

They hadn’t known each other that long before the taxi driver incident, and Pablo had presumed Marta would likely avoid him after the trouble. But she wore the black turning blue then yellow bruises with defiance. She didn’t ask for, or expect, sympathy, but word got round the basura and accorded her some kind of respect. It took weeks for the bruises to creep down her cheeks and finally sneak away beneath her neckline. But, to Pablo, they were a mark of her courage and strength, and a warning to anyone else who may have considered wrangling with her.