Posted 3504 days ago by Si Mitchell 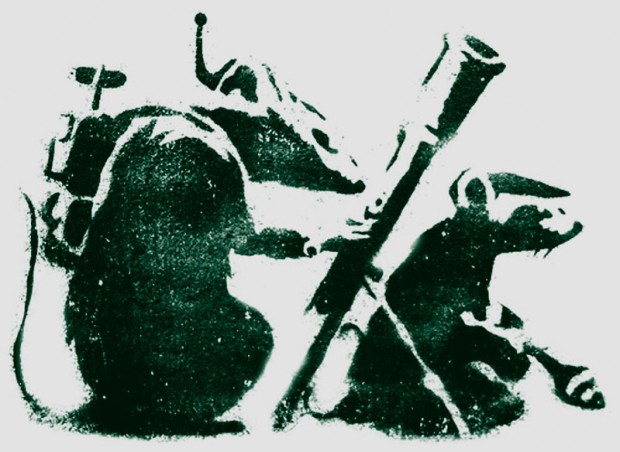 On the way home I see someone’s put a cat flap on the side of the bank. ‘Fat cats have cat flaps,’ it says in spidery marker. ‘Put ‘em to use!’ It goes in the book.

I cut through the park. Some lads from my year are playing football in the cage. I don’t play football. Dad tried to teach me but I couldn’t even hit the back wall. We tried all sorts, judo, swimming, cricket. In the end we found our ground watching old Sci-Fi movies and writing three chord punk tunes on his old guitar.

In the playground, a small boy in socks and jelly sandals trips and traps across the monkey bar bridge angling for some troll action while his mother thumbs her phone. I sit between the bolts where the top of the super slide used to be and watch the light fade and the street lamps blink on.

When I get home Mum’s on the way out, dressed like an aging Miley Cyrus. Her musky perfume hangs in the air like a hateful promise. Outside, another one of Dad’s old mates scuffs at the gum on the pavement.

“There you are babe.” She likes to play at being buddies when there’s an audience. “There’s dinner in the chip shop. Money on the table. You’ll be alright won’t you.” It’s not a question. “The man of my house,” she says hooking her arm into mine. Yeah right.

I see three more bad cats riding my bike into town early Saturday morning. New arrivals cut both ways. They’re exciting, but they can also be kind of scary. Till you work out what they mean.

I peddle slowly around the deserted centre and wonder how much glass and Italian marble you need to sell overpriced jeans to people with bursting wardrobes. They spend millions tarting up these streets, but it’s still just shops. It seems a pity to fill our city with shops – like it’s not our town at all.

I didn’t cycle for years. I’m not very good at it, Dad says he lost a stone running round the park with a hand on my saddle. But I like it now – when I’m on my own and I can go at my own pace.

The morning is sparky and bright and not quite cold enough to smoke your breath. After a while, a security guard with a gut like a space-hopper comes lolloping towards me, all tiny pink head and big yellow vest. I don’t need to wait to hear what he’s shouting but cut up towards the Bear Pit.

I don’t usually go through the Bear Pit. It’s a giant hole in the ground carved out of the roundabout where the motorway meets the town. I guess it was cutting edge architecture in its day – all wackily-angled, pebble-dashed walls, scrawny shrubs and un-sit-on-able benches that still manage to puddle with rainwater.

The traffic rolls in thick and fast here so there’s no zebras or green men. To cross the roads that spoke off the roundabout you have to dip down one of the steps and ramp-runs and through one of the wet tunnels, invariably manned by a wet beggar. The tunnels pass under the road and into the Pit. The place is a kind of hang out for idiots. A giant concrete amphitheatre open to the sky, which, though uncovered, is buried deep enough to bounce most of the city’s noise and all but the most persistent mid winter sun. I’m not a big fan of druggies or their stupid black dogs. Ditto stuck up rich kid skaters. But part of me thinks it’s too early for trouble, and there might be some new burns down there, so I bump down the steps and into the underpass.

I’m almost out of the tunnel when I see her. She’s standing right in the middle of the Pit staring at the ground. I stop where I think I’m still out of her sightline.

She’s just bones, like a doctor’s room dummy, in jeans that’d be tight with thighs in them. She’s rolled them up over her pipe cleaner ankles and raked them in with her dad’s belt where her waist ought to be. A red plastic bangle that could take both her forearms, and maybe her legs too, hangs like a lifebelt off her pasty wrist. She’s like paper in this light. Not a mark, not a freckle. Her penny-bright hair bristles where it’s cut high at the back – like a replicant, y’know from Blade Runner – and the harsh light flashes copper orange where her fringe hides her face.

“Nice heart,” she says and I jump like a stalker. I consider turning tail, but decide that would be too much of a Stoner tactic, so I paddle my bike over to where she is. She doesn’t look up but I stop with my front wheel just inside what I reckon is her line of vision. Stenciled on the ground, centered in the chest of her murky shadow, there’s a red heart, crudely split by a white zigzag stripe – like a lightning bolt. It’s not your valentine shaped heart, more like a clunky diagram copied out of a biology book. You can see its chambers and one protruding fat tube has gobbed out a stream of blood that’s flowed all the way to the soakaway and down – like the heart pissed the last of it’s life away here in this spot. I nudge my tire over the thin red river and the skin breaks and oozes into my tread.

“Wha…” We both go to speak at the same time and look at each other startled. A laugh erupts from my nose along with a fistful of snot. I tug it away in strings and rub my hand down my jeans while pretending to study the heart on the ground. When I look up she’s smiling. But not in a hurtful way.

“The others? Other stencils?”

We cut through town, leaving a trail of red tire-splodges on the new block paving. I point out stencils as we go – a dog pissing up a rope, an old and faded bomb riding monkey and a cop taking a crap behind a dustbin. She says she likes the monkey, not so much the others. I try and heel half cranks across St Ann’s car park in an attempt to ride at walking pace but it’s too slow and I lose balance.

“Easy rider,” says Elsa catching me before I go over. “Here.” She keeps a hand on my saddle and we go along like that for a bit. But it feels kinda silly so I get off at the crossing and we walk with me pushing my bike.

I ask her about Parklands and the ear. She chuckles and asks if I believe everything Rabbit Knight says.

“A nutjob eh?” She says it like she’s considering it before she answers. “Maybe. Maybe he’s just and angry kid with a chip on his shoulder.”

She laughs, stops walking and hoiks my wrist out of my sleeve.

I tug my arm back. The rope burns have mostly scabbed up, but one patch is still weepy.

She doesn’t seem shocked. She gives me a kind of sad smile. We walk some more.

After a bit she says, “Why do they call him Rabbit?”

“He got s-stuck in the headlights,” I say and she screws up her nose. “No, really. Playing chicken.”

“With Kerry Turner and the Pitsons and th-that St George’s lot.”

“Breaks both his legs, pelvis, ruptures something else. He was off s-school till the s-summer. Lucky to be alive they said.”

“Lucky,” she says. Then she pulls my sleeve back down. Gently this time.

“I wouldn’t stress Danny,” she says. “The next time Rabbit Knight freezes he’ll be up to his elbows in garden peas on the late shift at Asda’s.” And then she’s running, calling back over her shoulder, “It’s the geeks who’ll inherit the earth Danny Spinks.” And I clamber back on my bike and have to rattle the rust from my chain links to catch up with her.