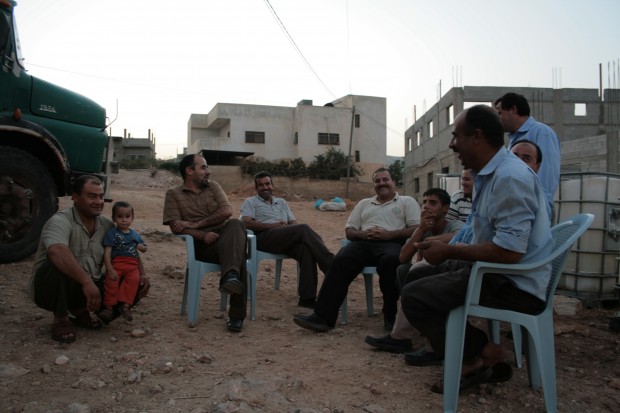 Island hopping through the West Bank with Mazin Qumseyah, Si discovers the power of place names and who’s got their hand on the tap.

“How can you tell the difference between a Palestinian and an Israeli house?” asks Mazin.

“Come on, how can you tell the difference between a Palestinian and an Israeli house?”

It’s 7am and I’m driving to Nablus with Mazin Qumseyah, a wily Palestinian Doctor of Biology who gave up an associate professorship at Yale University to return to the country of his birth. It’s early for guessing games.

“Okay,” I say. “I’ve got it. The Israeli houses are built in anally regimental lines and are surrounded by razor wire and… the Palestinian houses are falling down?”

“Look at the roofs,” he says. “Palestinian houses have water tanks on the roofs.” He’s right. Twenty years ago you turned on a tap in Ramallah and water came out, now you’re lucky if you get it twice a week. So Palestinians save it up. We chuckle, then Mazin says: “During the last uprising, Israeli soldiers would come and shoot the water tanks. Just out of spite.” 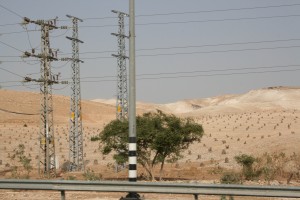 The stumps of Palestinian olives growing too close to the Israeli highway.

We bump and lurch down the snaking, chewed up, single lane into the Wadi Qelt – the Valley of Fire (or Death depending on who’s translating) – a thick rolling scar that cuts the West Bank from Jerusalem to Jericho. This is the only road Palestinians can use to get from the south to the north of the West Bank.

Today the Wadi does not smell good with untreated sewage running down from the settlements and the villages. “We have the money, millions of dollars in aid donations, to build a water treatment plant here to deal with it,” ays Mazin. “But Israel won’t allow it.”

Water, it would appear, is the imperialist’s gold standard choke chain and, in a land as parched as this one, it is particularly effective. Gaza’s water treatment plant was one of the first things Israel bombed during the siege. The twisted and twisting separation wall has parted the West Bank from over three dozen aquifers that produce six million litres of water a year. Meanwhile Israel and its settlers guzzle something like 80 per cent of Palestine’s water.

Two days later I’m in bar in a Bethlehem suburb struggling to be understood.

“Yes,” says the barmaid. “A half.” It turns out it’s not a language thing but a metric thing.

At the back of the bar I find Saleh Al Rabi, an engineer from the Palestinian Water Training institute, nursing a bottle of Tayber. I mention the soldiers shooting the water tanks.

I remind him about the Palestinian writer Marwan Bishara who said ‘the map of the settlements looks like a hydraulic map of the territories’. He’s heard it all before.

“Even Ariel Sharon said, ‘The settlements are where they are for a reason’,” he says.

Saleh tells me how Israel plans to build two desalination plants on its Mediterranean coast and pump the water into the West Bank. “That way they can turn it on and off at will,” he says. “Many Palestinians are already paying around a third of their income on water. We pay four times as much as the settlers who have 24hr water and swimming pools.

“The situation in Gaza is even worse,” rails Saleh. “Israel drains all the gravity feeds running down from the Hebron hills into the Strip. On top of that, the Gaza aquifer is, possibly irreversibly, polluted with seawater. They say the water is so polluted in Gaza, that if a Gazan drank bottled water he’d get sick.”

In Mazin’s car we count checkpoints and play a game trying to match the Palestinian villages we pass with names on our map because the road signs only point out the settlements.

Dr M’s lifelong friend and associate Aziz , a columnist for Al Quds newspaper, riding with us to Nablus, can’t get his head round my name. I tell him it again, two more times. He shakes his head. “I will call you Salim,” he says.

“Salim, you know the Arabic wording on the signs [given after the Hebrew and the English] isn’t even the Palestinian name for the town or the village but just phonic translations of the Hebrew.” Later, we will pass the left turn for the bustling Palestinian city of Salfit. The sign just says ‘Tel Aviv’.

The sensible route to Nablus wouldn’t be this way at all. It would be through suburban Jerusalem, it would take 40 minutes tops. But there’s a 10m wall in the way and Dr M’s Palestine plates mean he’s not allowed to drive the sterile highways that connect the settlements to Israel. This is the only way through. Trucks, buses, collapsing Cavaliers all have to arge and barge along this crumbling road.

“We call that one the Lieberman Highway,” says Mazin as we pass under the shiny new blacktop that runs from Nokdim – home to Israeli Foreign Minister Avi Lieberman – with Jerusalem. “It’s a settler road. Not for Palestinians.”

In Aza’in the road turns to grit. Aza’in, you see, is security zone B. At a glance, the geopolitical map of the West Bank looks something like Scotland’s Western Isles. But take a closer look, and you can see just how calculated the fragmentation of Palestine is.

The brown sections (less than 10 per cent of the total) are under Palestinian Authority control. Here the PA can dish out 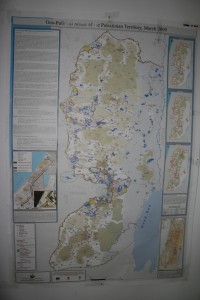 The West Bank archipelago of control.

building permits and the Palestinian police can strut around with AK47s making sure people wear seat belts. The dark brown sections, like Aza’in are Zone B – here, the Israelis have also thought to unburden themselves of the day to day organisation of Palestinian society but, due to the ongoing ‘security threat’, the Palestinians are not allowed to have any civic authority of their own. So there isn’t one and the road stays trashed and the rubbish uncollected.

Zones A and B float in the direct military control Zone C. This includes all the settlements (in blue) and the land connecting them. The Jews-only roads make it even harder for Palestinians to get about, and the dirt tracks that connect Palestinian villages barely register on the map. The East and West Security Zones – running up to 20 klix into the West Bank from the Israeli and Jordanian borders are loaded with army bases and settlements ranging from full on towns to a gang of armed zealots in a cluster of caravans. Palestine is an island nation.

Human rights groups have began calling these fragmented enclaves Bantustans – it’s the name given to the black enclaves created by the Apartheid regime in South Africa 1947, the year of the birth of Israel. The analogy is not wasted.

“There is an international convention against Apartheid and Israel fulfils it all,” says Mazin, swerving round an oncoming taxi. “Israel has it’s own word ‘Hafrada’ – it means segregation, same as ‘Apartheid’.”

Jeff Halper from the Israeli Committee Against House Demolitions compares the West Bank to a jail. On the surface it looks like the prisoners run the place – they, after all, make up most of the population, have the cells, the yard, the canteen. The jailers only control the keys, the doors, the walls, watchtowers, guns, punishments and the length of the sentences.

We drive past an elderly Bedouin woman herding scorched sheep from a muddle of corrugated pens. If you stood on the water trailer the Bedouins have had to drag into their camp to survive, you could probably see the date palms sprouting from the settlement of Adummin on the hill above. The Bedouins, nomads from the Jordan Valley, were ‘relocated’ here to these shacks. Now the Israelis want to move them on again. You’re never cured of being a refugee – you’re just in remission.

At the top of the hill we hit Route 60, the Jerusalem – Jericho road. Mazin describes it as “the backbone of the Israeli settlement structure”. It’s a fast moving carriageway that Palestinian drivers are allowed to share. The sharing turns out to be mostly nominal. ‘Welcome to Jabba’ reads a sign erected in ironic protest by the village’s residents above the fifty tons of rubble that blocks their access road. Further on, a similar scene greets us at the entrance to a village we think may be called As Sawiya. In the distance, the separation wall rises like a fin from the red earth, behind it white stone blocks stand rigidly to attention.

“What happens there?” I ask.

“That’s home to the Israeli-run Palestinian Civil Authority,” says Mazin. “There’s nothing civil about it. Literally or metaphorically.” It’s where Israeli officers in civilian clothes control the West Bank.

Take every hilltop. An Israeli settlement in the West Bank.

On a hill near Ramallah we see the solitary fortress of one infamous US millionaire settler who stalks the surrounding hills with his M16 picking off Palestinian sheep. And by the turn for Eli, we pass a giant billboard of a smiling white child declaring ‘Welcome to Judea and Samaria It Belongs to Every Jew’. Several miles later we pass the turn for Eli Cemetary. I ask Mazin about this.

“They put the cemetery far from the settlement,” he laughs. “So they can colonise land even after they die.” No Israeli government however liberal – and believe me, they ain’t – is ever going to evict dead Jews. “That’s why talk of a two state solution is delusional,” says Dr M. “There’s a half a million settlers in the West Bank. Who is going to move them?”

As the climbing sun bleaches the colour from the day, we drive through the village of Hawara. Hawara reached notoriety in 1989 for what became known as the ‘night of the broken clubs’. It was during the first intifada that Israeli troops came to Hawara and made the mayor cough up twelve young men. The soldiers took them up into the hills and smashed the arms and legs of every man but one. The beating was said to take three hours – and the beating was so severe the clubs broke. They only smashed the last man’s arms, so he could walk back for help.